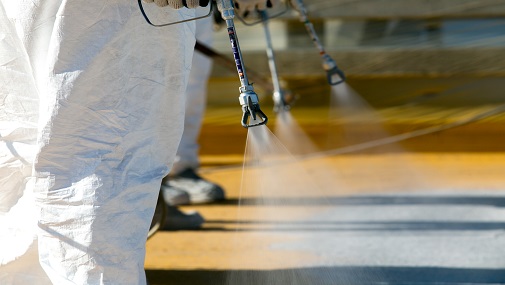 The ELIMINATOR® bridge deck waterproofing system was selected to provide extensive waterproofing for an iconic transit system in the northeastern U.S. The three-year refurbishment plan, which began in 2014 and was completed in mid-2017, addressed the issue of water leakages throughout the steel plate and concrete structure.

The technical benefits the ELIMINATOR® bridge deck waterproofing system offered fast curing in order to keep disruption to a minimum, and the ability to perform effectively in the region’s extreme weather conditions.

The station covers a total of 49 acres and operates 44 platforms, transporting more than 750,00 people every day.

Mostly underground, the station is built with steel plates, much like a ship is constructed. However, with time, water intrusion became a growing problem, with leaks appearing throughout the structure. To protect the landmark, an ambitious project to waterproof the station was needed.

The extensive refurbishment plan was introduced to address the issue of water leaks that were affecting the underground station platforms and public areas, including roadways and elevated viaducts. Furthermore, the roadways above the steel station roofs were not designed to be driven on directly, so were paved with asphalt surfacing. In fact, in some locations, the paving was several feet thick having been built up over the century since the station was built. All of these issues needed to be remediated to safeguard the structure.

Stirling Lloyd (now GCP Applied Technologies), leaders in the development of waterproofing systems, was asked to provide the best advice and product solutions for the challenging project.

"Due to the size and geometric complexities of the station, it was certainly a challenging project to be a part of, particularly as the structure was already suffering from a series of leaks,"
-

The specifiers were in need of a product that could be applied with ease and speed and that would future-proof the structural integrity of one of the most famous sites in the US.

The customer and their general contractor were able to take advantage of the technical benefits of the ELIMINATOR® bridge waterproofing system and tackle a project that would have been beyond most other materials. This was largely a result of the waterproofing system’s unrestricted overcoating window, which provided unlimited flexibility to the contractors. This in turn allowed the contractor to minimize disruption to active traffic in this busy location.

The ELIMINATOR® bridge waterproofing system was chosen due to its proven track record of success for the structural waterproofing of new and existing large structures, especially those with complex geometry. The waterproofing was required to transition from the steel plates and up the various layers of concrete, which had built up the sidewalks in the intervening century since the structure was first built.

The waterproofing membrane has an exceptionally strong bond to both the asphalt paving and the deck. This strong bond throughout allows the steel deck, waterproofing, and paving to behave as a composite. The system also acts as a barrier to prevent steel corrosion.

The spray-applied ELIMINATOR® waterproofing system cures in one hour. The fast cure capabilities kept disruption to a minimum, which was a major benefit when conducting work on one of the busiest transport hubs in the world. In addition, the specially engineered system allows waterproofing to be applied and to perform in-situ in both extremely high summer temperatures and extremely cold winter temperatures - an essential requirement in this area of the country.

"Fortunately, our bridge deck waterproofing experts were able to come up with the perfect solution to the challenge, and the station is now protected for many years to come."
-

To prepare the roadway and elevated viaduct structures for the ELIMINATOR® waterproofing application, the steel decks were first vacuum blasted, a method that performs abrasive blasting and collects debris and loosened particles from the surface simultaneously. This technique was of paramount importance for the busy station, as it ensured the immediate retrieval of dust and particles, creating minimal impact on the environment.

“Due to the size and geometric complexities of the station, it was certainly a challenging project to be a part of, particularly as the structure was already suffering from a series of leaks,” said Tom Carter, Stirling Lloyd Sales Director at GCP Applied Technologies. “Fortunately, our bridge deck waterproofing experts were able to come up with the perfect solution to the challenge, and the station is now protected for many years to come."

Using a product with a proven record of protecting steel and concrete structures (gained over three decades in America and in over 50 other countries) was fundamental to the project. Thanks to the ELIMINATOR® bridge deck waterproofing system, the structure will be protected for future generations.